Skip to content
Cart (0)
A little over a year ago my first printer, a M3D Micro, burned out.  That wasn't a huge surprise since M3D, at least in my experience, was running more a sham than a successful kickstarter program.  That first printer required a ton of maintenance and even then getting a successful, much less good, print was more luck than anything.  It failed even as a trial/introduction printer.

So I replaced it with another small printer to test it's applicability, MonoPrice's redundantly named Mini Select.  It was another cheap printer aimed at household use but it had the noteable advantage of being reliable.  You could give it the same print more than once and reasonably expect it to come out the same way.  I developed a lot of nifty things, notably the prop coins, on that little printer.  Then it too died a couple of weeks ago.  I was troubleshooting a sensor issue and in power cycling the printer there was a short that released the "magic smoke."  That would've been covered by the warranty but it'd expired a couple weeks earlier.

In any case, the MonoPrice definitely succeeded in helping me test how I could use a 3D printer for the shop.  I was able to print tools, tap-offs, and products as needed.  That gave me the information I needed to decide to invest in a full-size production printer.  After a bunch of research I picked a Lulzbot TAZ6.  I've been printing with it for about week now and I'm really happy with it.  The detail is a lot finer and more consistent than either of the previous printers.  And the build volume is about 11" cube.  It's huge! 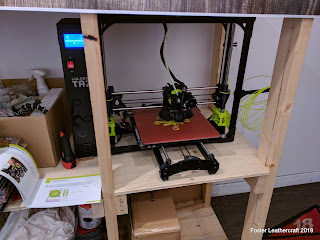 I'm looking forward to developing some really neat products with this thing.  In particular I think this'll let me bring back the old DM Toolboxes.  Those were a popular line I had to retire because they took too much labor with finicky results.  Thanks to this thing's huge build volume though I could print the entire structure of the box as one piece of plastic.  Wrap that in leather and it should be good to go!
Tweet Tweet on Twitter Pin it Pin on Pinterest