Skip to content
Cart (0)
As previously discussed my "old" M3D printer had a disappointing existence until a couple weeks ago when it gave up the ghost.  It could have been revived with a $50 part (plus ~$30 for shipping) but I'd pretty much had my fill of it.  The most valuable thing I got from that printer was probably the lesson to check fan forums for a thing before buying that expensive thing.  In fairness to me that wasn't an option when I bought the M3D (since it wouldn't start shipping for ~8 months after that). 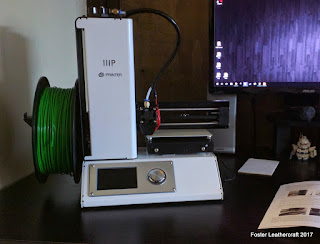 That wasn't a problem with the new printer.  Monoprice's Select Mini has a fair few reviews spread around the internets.  The fan forums point out a few valid issues (mostly with parts that are easily replaceable) but on the whole the impression is very positive.  It's not a perfect printer, or a top of the line printer.  But it is a "Pretty Good" printer made better by some solid construction and a low price point.  It's pretty rough around the edges, especially when it comes to its documentation, but I would argue that this printer is doing a much better job of achieving M3D's mission of a "household" printer.  It's a good entry level printer but if you're new to 3D printing you should probably expect to spend some time googling to find the common procedures that aren't described in the manual (things like changing filament, printing over USB, etc). 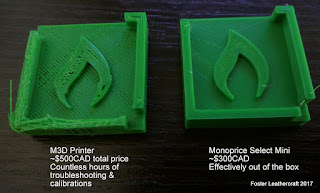 I mostly used the M3D for making tap-offs that I used to create other things.  In the course of their duty tapoffs get smashed between a rock and a heavy maul so they don't always last very long.  The example above is the tapoff used to making the burning tokens for the 5e Condition sets.  The one on the left is the old tapoff from the M3D.  You can see the gaps in the surfaces, the bumps on curves, the general sloppiness.  That was the best I could ever get out of that printer.  On the right you see the exact same model printed on the "Monomini".  This was the first print I pulled off that printer and in addition to being much sharper and smoother, I suspect it'll last a lot longer too. 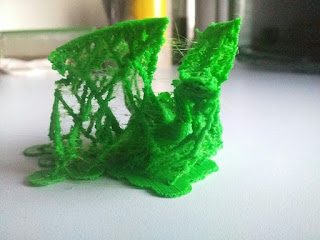 Tap-offs are all well and good but they won't show us the limits of what a printer can and can't do.  Anyone who's been following my twitter account for a few years might remember that time I tried to print a dragon and got more an ooze.  I think the picture pretty much speaks for itself. 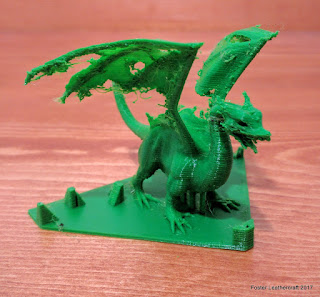 I dug that same file out of Thingiverse so I could try it again on the new printer.  I think this does a pretty good job of showing the printer's limits.  It's a vast improvement over the ooze-dragon but there's still some gaps and issues.  In fairness to the printer, a lot of those were probably because I printed it at about 1/2 the intended scale and those wings were pretty thin to start with.  If I fiddled with the model and built in some better supports then I'm pretty sure I could get a clean, ~100mm tall dragon with nice clean wings.

All in all I'm pretty happy with the new printer and I expect ya'll can expect to see more prints popping up across the store.
Tweet Tweet on Twitter Pin it Pin on Pinterest