Skip to content
Cart (0)
Another interesting commission for someone's christmas present.  In this case the goal was to work something "Space-y/Star Wars" into a belt suitable to be worn into a courtroom (since the recipient is a lawyer).  The client and I had the usual back and forth and settled on a series of the Rebel logo on a matted background.

I spent 10 hours carving the belt the first time around before I realized I'd done the whole thing backwards.  Men's belts always have the buckle on the left and in a supreme moment of derp I'd accidentally put the buckle on the right.  There was nothing for it but to cut another belt and start over from scratch.  No worries about wasted material though.  The mistaken belt is being repurposed for cosplay. 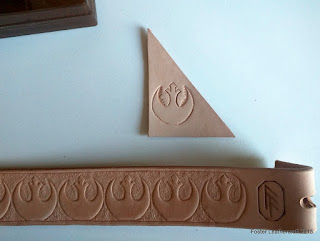 In the meantime I'd figured out that I could make the rebel logo (more consistently and faster to boot) using some cams and an old wood gouge.  Using that technique on the second belt it came together much faster (a bit more than half the original time) and I think it looks a fair bit nicer too.  Its on its way down to Australia now and I love the thought of some subtle fandom in a court room.