Skip to content
Cart (0)
The same month I opened the shop back in '14 I'd ordered a 3D printer from M3D.  At the time they were being billed as an entry level printer that was simple and reliable enough for anyone to use for everyday anythings.  In the year I spent waiting to receive the printer other initial adopters were receiving theirs and... well I suppose we could say the receptions were mixed.  After shelling out the duties my total bill for this printer came pretty close to $500 when I finally received it in July 2015.  And after all of that waiting and time my first attempts at printing were pretty disappointing to say the least.

It took several months of tinkering, researching, and working out the kinks in the hardware and the software to finally start getting functional (not yet good, just functional) prints 7 out of 10 times.  I learned that the spool had to be suspended over the printer to reduce any tension on the filament as much as possible.  I also learned that if I wanted to scale my prints I needed to go through a complicated process of piping it through a separate piece of software before sending it to M3D's proprietary software.  Funny story too since they sold the printer as being able to work with any open source software (it can't). 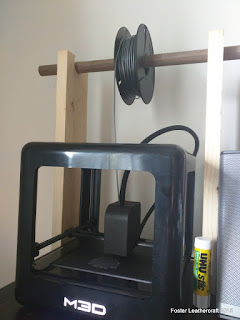 This list could go on for at least a few more points but the summary is this: If M3D's goal was to create an inexpensive printer that didn't require much maintenance and any layperson could use right away then they failed catastrophically.  This wasn't helped by the impression that the closest thing they have to a support department are the forums where their customers are trying to figure out their own fixes.  If you check the official M3D FAQ it's full of links to those forums.

In fairness I did get a couple prints I would call "good" after the 1.5.1 version of the software was released last fall.  And even the vast majority of prints weren't quite "good" they were good enough for most of what I needed to do.  I was able to dress up the corners of the DM Toolbox with custom fit caps thanks to the printer.  And I've printed lots of tap-offs, which was the original reason I invested in it, so it's been a success in that way.

All of which brings me to now.  As the title implies the M3D has effectively kicked the bucket.  The feeder gear that pushes filament into the extruder has gotten wobbly and can't push the filament any longer.  I could replace the entire assembly.  This component is troublesome enough that M3D does sell it separately through their internal store.  And the printer has worked just barely well enough that I functionally require a 3D printer now.  But if the choice is between investing another hundred or so into this printer or five times that to entirely replace it with a different brand, it's a pretty easy choice for me to make. 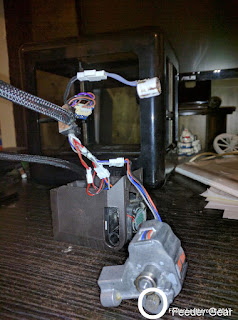 I don't yet know what I'll be replacing it with but it's definitely going to be a printer that's been out for a while.  The Printr bots are a good contender but I'll be doing a full review of my options over the week before ordering something by Friday.
Tweet Tweet on Twitter Pin it Pin on Pinterest