Skip to content
Cart (0)
We're just about to start running the Waterdeep: Dragon Heist campaign and I may have gone a little overboard in building props for this new campaign.  Many of these could well be prototypes for future shop products but just as many were just about trying new things and/or making something I figured would be useful. 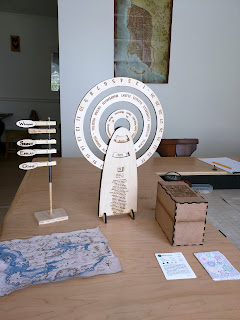 * Map of Faerun - Because why not?  The Sword Coast has too many place to keep track of and even if this campaign won't leave Waterdeep I like having maps at hand.  This one was pretty easy since I just engraved Deven Rue's awesome map on some pigskin and added some blue to the bodies of water.
* Spell Cards & Case - This one took awhile.  Not as long as it should have, but still awhile.  There's a PDF kicking around the internet with all of the SRD spells so then I just had to make cards for all the other spells in the books we already own.  And because I'm me I drew a fancy back for each card and built a chest to hold them all.
* Forgotten Realms Calendar - I've been trying to figure a way to show & track date-time information at the table for ages.  I don't have the sense it's important to most campaigns but for various reasons I often need to track the phase of the moon or some PC's logistical what-not.  And in Dragon Heist I understand time and date are pretty relevant.  So this calendar has a wheel for time of day, month, and day and all of them are pretty easy to rotate and use.  I burned the holidays in Waterdeep on the base just because I'm a nerd like that.
* Initiative Tower Name Tags - Everything else here took at least several hours to pull together, most of them a few days.  The Name tags took maybe 15 minutes but they're what the other players remarked on the most.  Go figure. =P 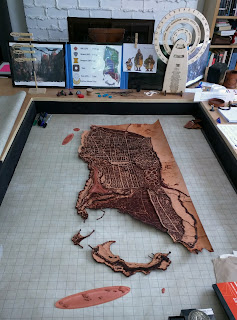 And on top of all of that there was one prop that... hasn't turned out so well.  I wanted to make a topographical map of Waterdeep and really push at the boundaries of what I've been able to do with the laser cutter so far.  I spent a lot of time drafting, tweaking, and calibrating and my initial results were looking pretty promising.  Then I spent two days and most of a side of leather making the full thing and... yeah, I'm not happy with it.

There's a few things going on here but it fundamentally breaks down to image processing and material.  The first is pretty complicated but essentially, the more the image is processed the clearer it burns but the less detail it has.  The balance I'd struck in small scale didn't work great at large scale.  And as for material, to make a map so large (18x36") I had to cut it into 27 pieces across 4 different layers.  It took a ton of leather to make this thing but as a material leather's pretty dynamic.  It warps and stretches and curls.  Peices that are laser cut to fit together perfectly just won't.  It was really frustrating.

I still have all the raw work that went into drafting and I'll probably revise that to make a smaller map out of plywood, probably closer to 12x24".  And if that comes out well, maybe that's something that can go one the shop.
Tweet Tweet on Twitter Pin it Pin on Pinterest