Skip to content
Cart (0)
Ever since we picked up our pooch, Max, I'd figured to make him a custom collar befitting his handsome self.  Martingale collars are all the rage these days so that was the obvious style to model the collar on. 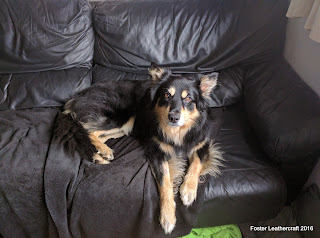 Max isn't terribly large (50 lbs of 30 lb dog) but as a Husky/Collie mix he can be pretty energetic on walks.  So if anything I figured I'd overbuild the collar.  It's 1.25" wide laminated latigo held together with a sturdy saddle stitch.  The slip loop is essentially the same, laminated latigo, but I figured I'd close it with a chicago screw so that it could be opened and closed if I needed to resize it.

The basic idea of a martingale collar is the same as an old fashioned slip collar.  If the dog jumps or the trainer pulls on the leash the collar restricts in such a way that's equivalent to telling the dog "nuh-uh".  In theory martingale collars should be better than slip collars (aka chain or choke collars) because they distribute the pressure around the neck (though as near as I can tell slip collars do the same thing).  There's some concern that prolonged slip collar use can weaken a dog's neck muscles but this mostly seems to come from a single study in Germany that I'm a bit skeptical about.  It's certainly an area that could use more study.  Suffice to say there's piles of anecdotal evidence, little scientific data, and ample controversy around dog collars.

So far as Max goes he didn't respond to the martingale collar in the least.  This may be mostly a Max thing (he's very easily distracted) but the one time he wore the collar outside on a walk it proved harder to keep him under control that otherwise.  That was a particularly bad morning (lots of other dogs out) and Max got excited enough that he sheered the chicago screw, breaking the collar and causing a bit of pandemonium.  He went straight home after and everything turned out alright but I think I can say that for Mr. Max, this style of collar isn't very effective.

I may still add them to the store someday but I'll need to find a better solution than the chicago screw.  In the meantime, happy dog walking! 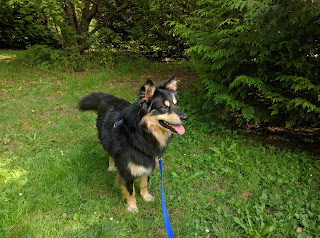