Skip to content
Cart (0)
One of my favorite challenges of craft has been reverse engineering video game gear and trying to figure out ways to replicate it in meatspace.  This is usually pretty difficult since video game artists aren't limited by physics and they often don't understand the materials they're portraying.  In this case I had a commission to reproduce the original backpack used by Lara Croft back in the early days of Tome Raider.  This would have been a great project to devote a couple of weeks to but I needed to expedite it to make sure it would arrive in time for DragonCON. 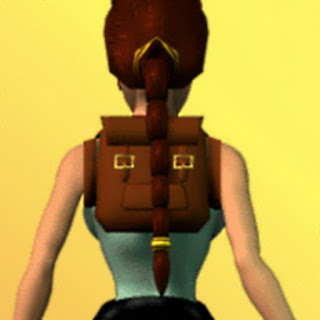 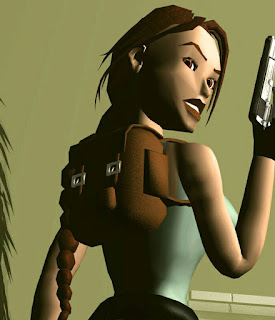 There are lots of details that make this backpack a challenge.  My personal favorite is that the buckles are upside down.  If they were really holding the lid closed then the tongue of the buckle would need to be pointing up, not down.  That little detail seems to have recurred through most of the Tomb Raider games until they changed the backpack entirely.  The client was also rather partial to the angled corners on the pack, which would be challenging but not impossible to reproduce.  And then there's the tiny, nonadjustable loops that would probably force Lady Croft to dislocate a shoulder to get her arms through.

I used measurements from the source images to figure out what the proportions and angles should be and scaled that to the client's measurements.  That gave me a pattern I could use to cut out all the requisite parts. 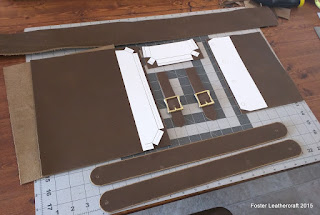 The basic idea was to have a matching front and back piece that would be stitched to a gusset.  There might have been better ways to make the leather take that shape, possibly by molding veg-tan around a custom-made hardform, but I wanted to use the most sure method to reduce the odds of needing to start over from scratch.  Some of the elements were attached with glue (essentially anything that wasn't structural) but I managed to stitch the front pouch into place. 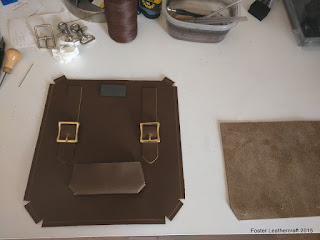 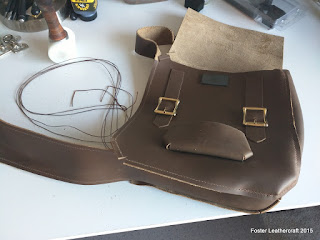 The lid is held closed with a magnet and I was a bit concerned it might not hold well enough.  Turned out it holds a little too well.  The lid needs to be opened by sliding the magnet off rather than pulling it free.

My biggest concern was that the corners would need some sort of reinforcing to hold the angles.  As I was stitching the gusset into place though it became clear that that probably wouldn't be necessary.  The stoned leather holds the form rather well all on its own.  So well that even if it's loaded with a few pounds of weight it doesn't sag.  I work with stoned leather practically every week but I was still a bit surprised at how well it molded to the shape.

All-in-all, it's been a pretty enjoyable project and one I'm pretty happy with.  The bag's on its way to Florida now and DragonCon shortly there after. 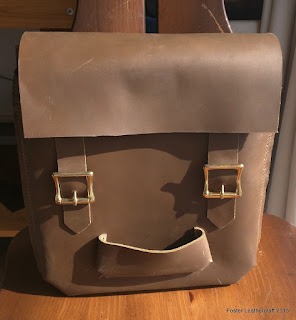 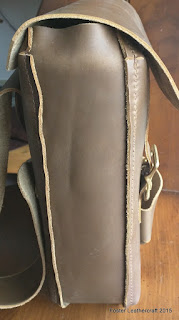 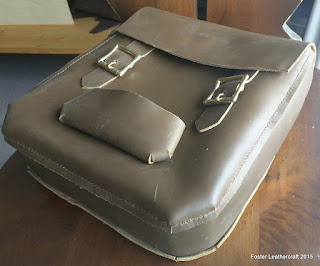 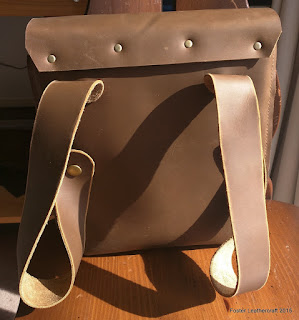 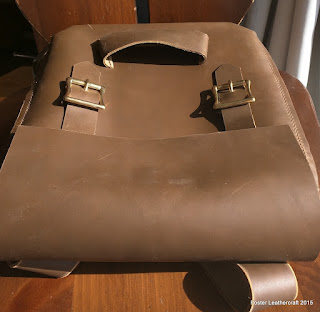 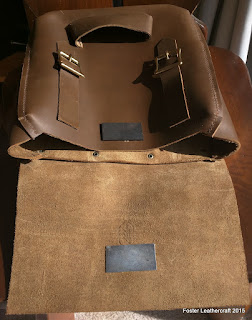 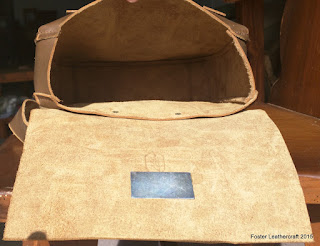