Skip to content
Cart (0)
For anyone who follows me on twitter this is probably old news.  As soon as work let up enough to permit me the time I took a cartography course offered by Deven Rue (details at rueink.com).  I've made lots of maps from scratch but usually the whole process happened in the computer.  Ms. Rue draws her maps by hand and aside from the different technique it was exciting to see how someone else approaches the same problems. 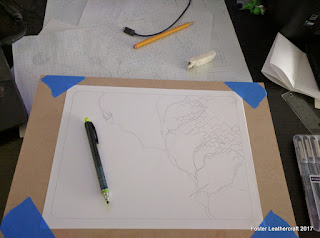 I couldn't guess how long it took to draw the map since it I worked on it a couple hours at a time over the course of at least a week.  I had a vague idea of what I wanted when I started and starting with a pencil (as opposed to a mouse) made it pretty easy to play with things on the fly. 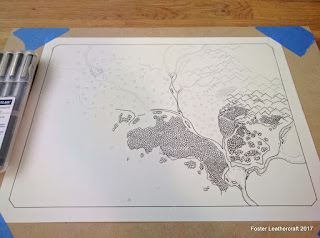 I bought a set of micron pens and some heavy vellum paper for just this sort of project.  Using the two together there's a sort of subtle texturing to the lines that, again, wouldn't necessarily come out of a map drawn on the PC.  Of course, it took forever to ink all those trees and do some of the shading and details but probably not that much longer than it would've taken on the computer when I think about it. 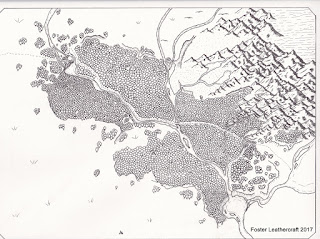 I'm pretty happy with the result on its own and I've noted some things I can improve on when I get the opportunity to draw another map.  In the meantime, I took advantage of having a high resolution scan to add some color and detailing.  Now it'll probably sit about gathering dust until I can pull it out and make use of it in some future campaign. 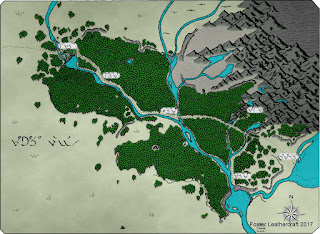