Skip to content
Cart (0)
The late guitarist for WHO, John Entwistle, had a pair of guitar straps that were fairly unique.  One had a skeleton arm stretching along its length and the other a white spider web on a black background. 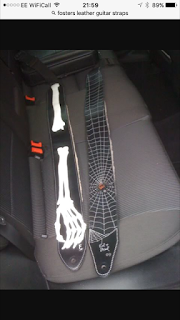 The client was hoping I could mimic either of those guitar straps.  It was hard finding photo references for either of them but I could see enough of the skeletal strap to determine that I probably couldn't practically replicate it.  I'd have to sculpt the bones, probably out of EVA, and that isn't a material I have enough experience with yet.  So we went with the spider strap.

I didn't notice until late in the drafting that the original spider strap has a little spider sitting in the middle of its web.  It's hard to see as anything but a red dot in any of the photos so I made my own from scratch.  The bodies are 3D printed and then I sculted a little bit of latigo to give them some depth and color.  The lines were a bit trickier.  I'd go over them once and they'd look white then the paint would cure and they'd be grey.  It took 2-3 coats to get them to stay white.  It's a pretty neat effect though and one I hope I get to practice again sometime! 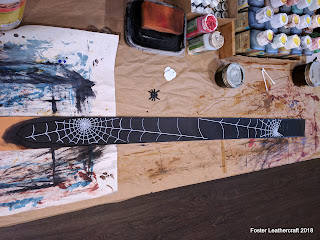 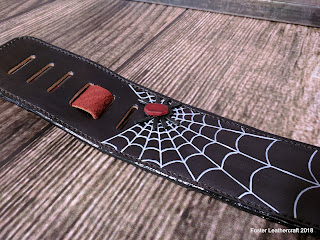 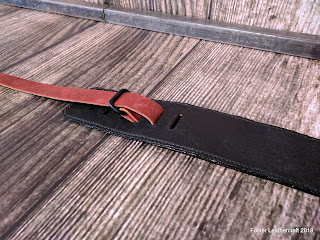