Skip to content
Cart (0)
The laser cutter opens up a lot of possibilities I didn't have previously.  The engraving function precisely burns down the leather to create more depth than simply darkening or burnishing the leather and the scoring is far more accurate than the old ink transfers.  While I was at it I drummed up an all new Monster Manual dice cup and broke out the DMG and Githyanki dice cups as separate designs. 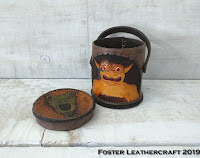 PHB
This is my best selling design so I didn't want to change very much.  Engraving the shadow behind the statue gives it a heckuva lot more depth and makes the staining that much simpler. 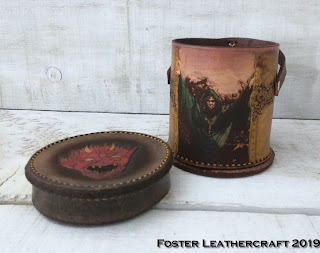 DMG
The old Keymaster's been in need of an overhaul for awhile.  I processed original cover into an engraving to capture all the shadows between the doors and overlaid my original design (with some cleaning up) over the top of that.  The lid's virtually unchanged except for a gradient around the demon's head. 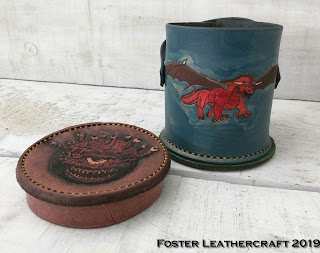 MM
Trying to find a good beholder image to start with was a bit of a challenge.  Technically that particular image came out of a dragon magazine (as near as I can tell) but it's from the same era as 1E AD&D.  The dragon of course comes right off the cover of the original Monster Manual, carved and stained to match the original covering. 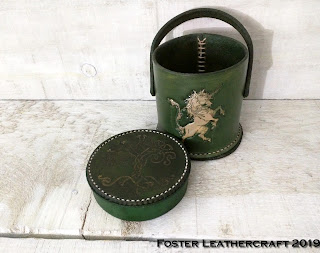 Ehlonna
Ehlonna hasn't changed too much.  The tree is an engraving now and I might start using a stronger gold for it in the near future.  Scoring the unicorn helped capture a lot more of the detail in the hair. 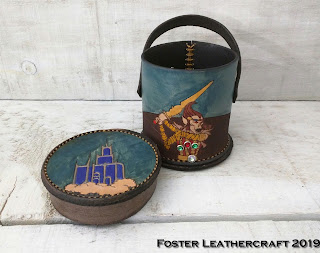 Githyanki
Engraving the hills behind the githyanki saves a lot of time and stain.  I think I'm still working out the best way to stain the githyanki since there's a lot of colors involved (they are pretty garish after all). 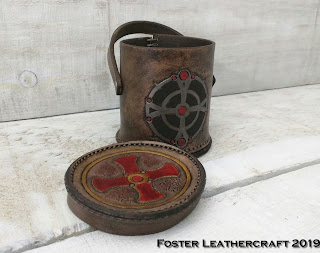 St. Cuthbert
If I know anything about St. Cuthbert it's that he loves his circles.  Now I can score them so they cut super cleanly and engraving the area inside the circle makes it even better.  I might experiment with a mottled gradient on the lid down the road but this is pretty good for now. 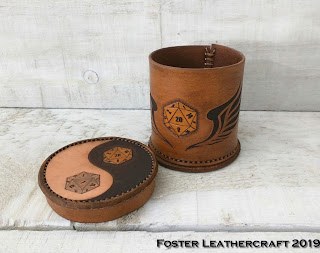 Winged D20
This was the first design I drew back when I was still figuring out how dice cups should work.  I used to barground the wings and while that looked great it took a pretty good while and inevitably got a little messy.  Engraving the wings gives them more depth and makes them nice and clean too.  I debated scaling the wings down so the design could fit a keeper but ultimately decided it was worth not having a handle to have the wings wrap around the whole cup.  Rather happy with how this one came out. 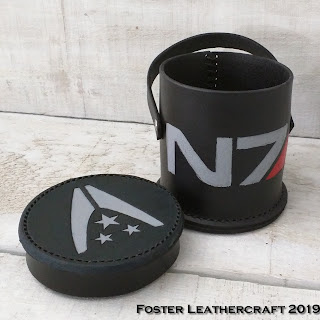 N7
I adapted this from an old design to experiment with different styles of engraving.  The N7 logo is itself engraved (and then painted over) while the System Alliance logo (on the lid) has the border engraved and the interior painted.  Unfortunately the painting wasn't clean enough for me to be comfortable putting this up in the store just yet.  If I ever have reason to make another of these I'd like to the N7 logo as an underlay and maybe, just maybe, make an overlay of the Alliance logo.  That should be pretty cool and clean. 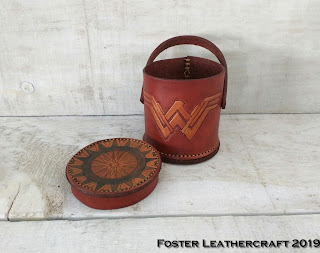 Wonder Woman
All the little details of the shield on the lid are waaaaaaaaaaay easier and more precise now that they can be scored before carving them.  I'm not sure the difference photographs well but I'm really happy with it.
Tweet Tweet on Twitter Pin it Pin on Pinterest