Skip to content
Cart (0)
Each year I've made some sort of ornament for the festive season and even before the shop opened I was handing them out to family and friends.  This year I figured I'd leverage this fandangled printer to produce some nice looking, consistent ornaments.  In hindsight it was a pretty good idea since I have no idea when I would've been able to crank out the number of leather ornaments I'd've needed otherwise.

I've already done christmas trees and snowmen so this year I figured I'd try my hand at some reindeer.  I grabbed a bevy of files off Thingiverse and started trying to print them using M3D's proprietary slicer.  Most of the prints I've been making this year have been processed through a separate software called Cura but I've been having a few issues with that lately so I was trying to cut down on the number of digital hoops to jump through for every print.  My first print, sort of a small reideer statue thing, -almost- came out but at this scale it just couldn't hold itself together. 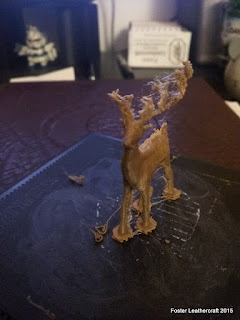 They quickly went progressively downhill from there.  Either the printer would abruptly shift halfway through the print or it would "get lost" and start printing off in mid-air.  Each of these prints took upwards of 6 hours and trying to tweak them for better stability just seemed to make it less stable. 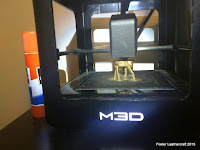 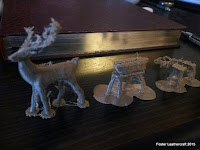 So I started trying some other models.  I soon realized that a flat model would be easier to ship anyway.  Only one of the flat models I'd found looked interesting enough to stick with so I tried focusing on that one.  It still took several days of running the printer non-stop, carefully documenting each change to the configuration, to get it to reliably successfully finish a print. 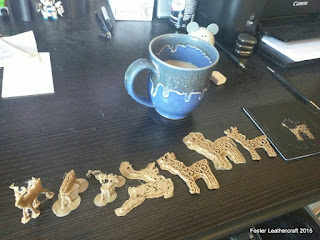 Thanks to that documentation I can say that it took 14 tries to land on the final model.  In the end I had to tweak the model itself in Blender to reinforce some areas so it wouldn't snap coming off the printer.  Normally a raft would prevent that but the way M3D was printing the rafts I wasn't able to get them to separate from these prints.

I'd like to think all that tinkering has been worth it though.  I print the result in about 4 hours (give or take) and it uses about a quarter's worth of filament.  They need a little cleaning up when they come off the print bed but nothing terribly time intensive.  No two prints are coming out exactly the same but overall I think it's a pretty reasonable result. 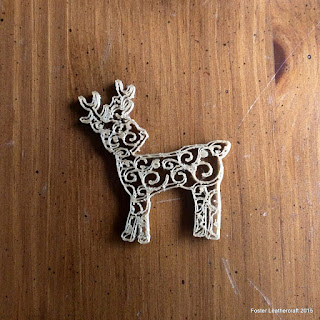 One of these is being included with every order shipped in the month of December.