Skip to content
Cart (0)
Whew!  Well that was a year.  On top of all the celebrity deaths there was that election that just tore the US up one side and down the other.  They're calling it the year the Fact died, which is probably justified, but it's certainly been the year we've all read the obituary for Nuance.  There's other blogs a plenty for the politics and world-changing stuff.  If you can find a moderate outlet, especially if it's a moderate outlet for a "camp" other than yours, I'd invite you to delve into it.  Call your representatives.  Be reasonably skeptical and ask questions.  And that's as politic-y as I'll get today.

It was a pretty enormous year for us too. In Feb I invested in a tool I don't expect to receive until the Fall quarter of 2017 but if half of what I read is accurate it'll be well worth the wait.  Then at the start of April my wife and I moved out the small apartment we'd lived in for 4 years.  We moved all of 5-6 blocks away into the ground floor of a house her parents had just purchased.  I spent April through June renovating our new home and building furniture.  It was a pretty intense time and as I was working around the clock on the house I wasn't able to spend any time producing things for the shop.  This went on straight up to a family trip to Alberta at the end of June.  Then as soon as we got back from that trip (the morning after we got back home) we zipped off to the pound and picked us up a pup: Imperious Maximus Prime. 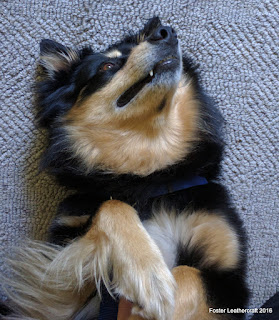 So yeah, a busy year.  The shop had been receiving more and more business at a relatively steady rate since I'd opened in the middle of 2014.  Having to essentially shut down for 6 weeks reversed that trend pretty quickly.  My fall quarter more or less bottomed out and I found myself back to the same pace of business I'd seen in 2014.  I used the time to develop prototypes, catch my breath a bit, and teaching Max not to bark at everyone else on the sidewalks.  And all that work came with a significant upside: my work area was able to expand into two entirely dedicated spaces with custom built furniture.  I expected that to make things easier, and it did, but I didn't expect how much faster it would make things too.  It's been a huge boon.

And thankfully things kicked right back into the crazy-busy gear during the holiday season.  I developed a set of tokens for tracking conditions in D&D based on feedback from the DMB community.  I listed them just before the holidays and sold far more of them than any other item.  The dice cups are moving pretty well too and things are looking pretty shiny heading into 2017.

I haven't finished crunching all the numbers yet but so far it's looking like, in terms of raw net numbers, the first and last quarters of 2016 were so good that I've still improved on 2015's numbers.  I'll be looking to continue building on that in 2017.  I want to expand the sets of tokens, build new pouches, refine the DM Toolbox, and do some more "artsy" things.  Also maps.  I don't think I'll ever not want to do maps.
Tweet Tweet on Twitter Pin it Pin on Pinterest