Skip to content
Cart (0)
I've been continuing to experiment with this M3D printer and I'm starting to have some success.  A lot of it comes down to calibrating the printer before each print, or at least everytime the filament is changed out.  There are still some other prints I'm having difficulty with, oddly persistent difficulty, but on the whole things are mostly working out.

I made my first original .stl (or at least the first one I wasn't sending off somewhere else to be printed) and printed it this morning.  It took a few tries to get the scaling right.  I had to do that mostly by eye and experimentation since M3D's software does its scaling by proportion rather than measurements.  But eventually I managed to print out a little quarterstaff bit for the LEGO Minifig I've been using as a GURPs mini.  Simplistic, yes (it's essentially a 3x50mm cylinder), but I feel it's been a good stepping stone for future models. 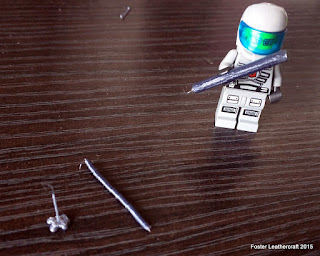