Skip to content
Cart (0)
I've had this M3D printer for almost a couple weeks now and for most of that time I've had it busy trying to print one thing or another.  I can honestly say that I've learned an awful lot over that time.  I've made a few models of my own, experimented with different materials, researched printing techniques and configures, etc etc etc.  Unfortunately, while I think I've learned a lot I can't say the same for the printer.  If anything my prints seem to have gotten worse over the past week, though that may be because of the material I've been using. Printer filament primarily comes in two varieties: PLA and ABS.  The first is more malleable, easier to use, and recyclable.  The second is cheaper, messy, and hypothetically stronger.  Since my goal is to make tools that would need to stand up to some malletting action I've been focusing on ABS.

ABS is challenging for a variety of reasons but the last nut for me to crack is getting the layers to properly adhere to one another.  That's probably a matter of dialing in the nozzle temperature with this particular brand.  The filament manufacturer's recommended anything from 210-250F while the M3D's recommended 275F.  I've tried everything from 230-250 and it seems to scale between layers peeling apart (too cold) to the extruder mashing everything together in a flat smush (too hot).

The biggest problem I've been having is shifting.  At first I'd thought it was due to backlash (essentially a gearing problem) but all my tests to wheedle that down have come up negative.  That doesn't change the fact that any print of any size is so badly skewed as to be unusable. 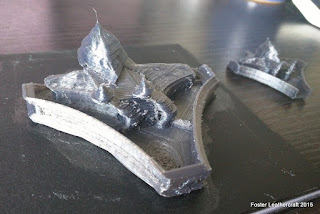 I've had 3-4 prints that came out more or less correctly.  With one exception they were all less than a quarter of inch tall.  That one, singular exception is the spool arm that's meant to hold the filament spools to the side of the printer.  That it came out correctly gives me some hope that the printer can work correctly.  The capacity is there. 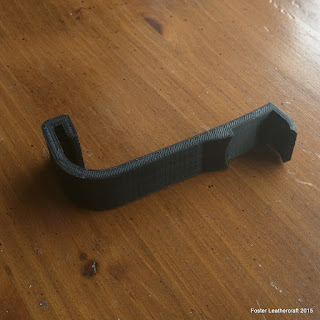 The line of failed prints is much, much longer than the successful ones.  I've used up about half the PLA filament (silver & black) that I ordered with the printer and I'm about ready to toss in the towel on ABS entirely.  I'm at the point where the only other thing I can think to do is doing a teardown of the printer.  Hopefully there's some loose screw or widget that I can tighten up and get it working reasonably reliably.

Unfortunately it's about the last thing I want to do at just this moment.  I have plenty of orders to get through in the meantime anyway.  I reckon I'll take this week off from 3D printing and come back at it next week, ready to dive right back into it. 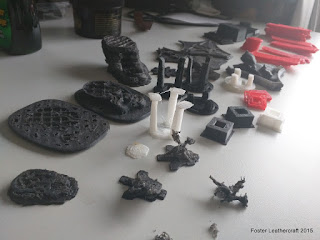